The Android world is moving to 64-bit and we all have to follow along. Google Play Store is sending out Emails to inform developers about the upcoming changes in August 2019 and August 2021. Here’s what you need to know, how it will affect you as a developer and why any Qt app should use Felgo Cloud Builds to save a lot of time and trouble. 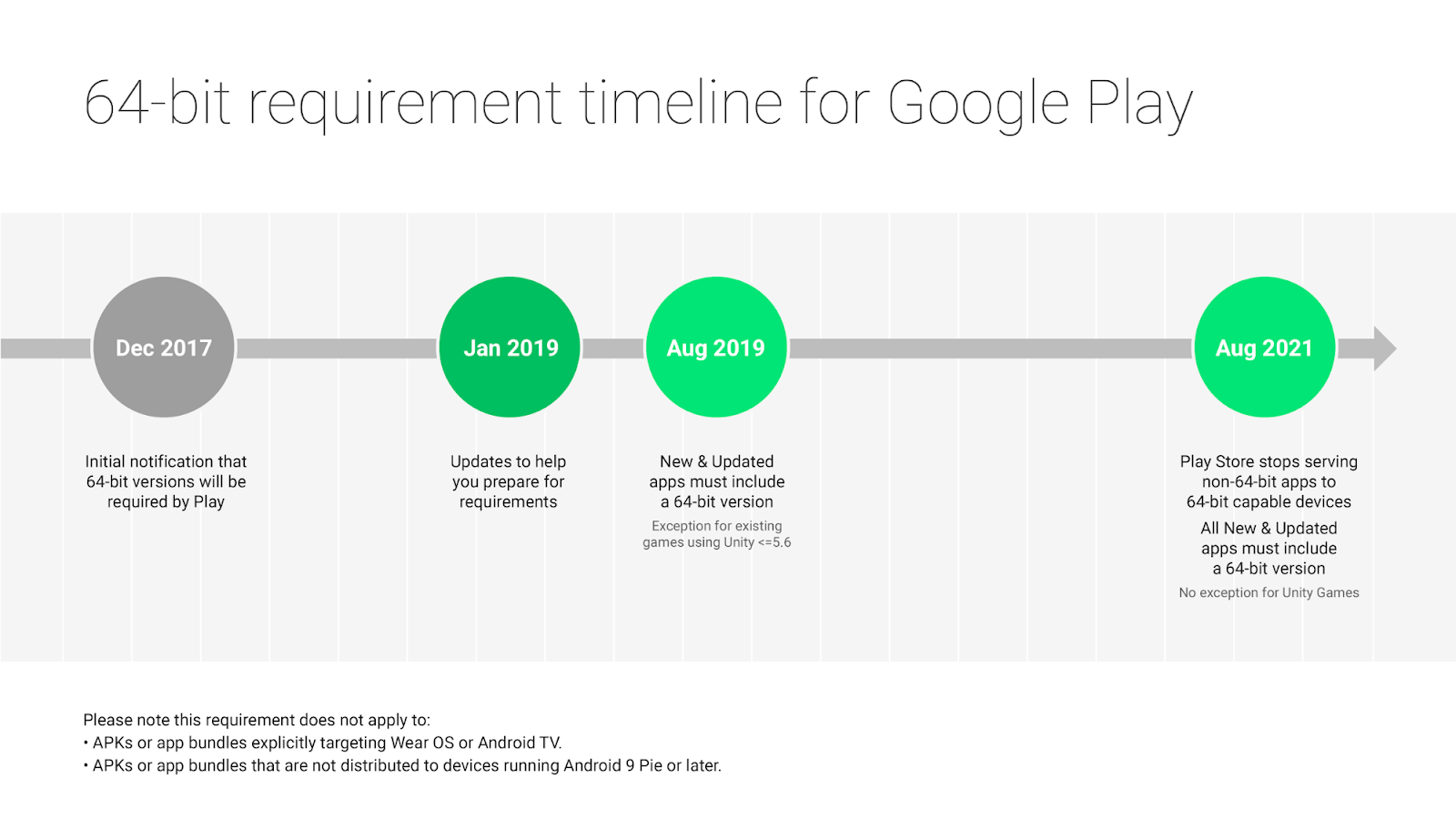 Before we go into details, here is a quick summary of what Felgo Cloud Builds offers for any Qt and Felgo app:

All those manual steps are automated with the click of a button. Let’s take a closer look at the process.

On a side note, Apple also switched to 64-bit for iOS a couple of years ago and today they only support 64-bit.

This deadline does not affect the availability of any published app that is already live in the stores. Users will still be able to see and download your app from the Google Play store. If you want to upload new apps, or updates you will need to provide additional 64-bit architectures.

From their documentation: All new apps and app updates that include native code are required to provide 64-bit versions in addition to 32-bit versions when publishing to Google Play.

So what do you need to do before this deadline comes? Actually, nothing.

None of your existing apps will be affected by that deadline. You will only have to include 64-bit for any future app submission. You will learn how to do this later in this post.

There is another small new requirement that does affect any project though. The targetSdkVersion of any app must be set to at least 28 starting with 1st August. You can find this value in AndroidManifest.xml in the “android” folder of your project:

This deadline will affect all apps in the Play Store. If your app does not include the 64-bit architecture, users will no longer be able to find and download it, if their device supports 64-bit.

From their documentation: Google Play will stop serving apps without 64-bit versions on 64-bit capable devices, meaning they will no longer be available in the Play Store on those devices.

So in about 2 years from now, all your live apps will have to include the 64-bit architecture. No need to panic!

You can choose between manual building and deployment, or automating the whole process using Felgo Cloud Builds. We will explain both options below. We highly recommend to use Cloud Builds for faster and easier building and especially for store deployment.

Install the 64-bit Android Package for Use with Qt Creator

If you want to use manual deployment, you need to install the new Android 64-bit package first. Open the maintenance tool located in your Felgo installation directory, choose “Add or remove packages” and you will see a new package available. 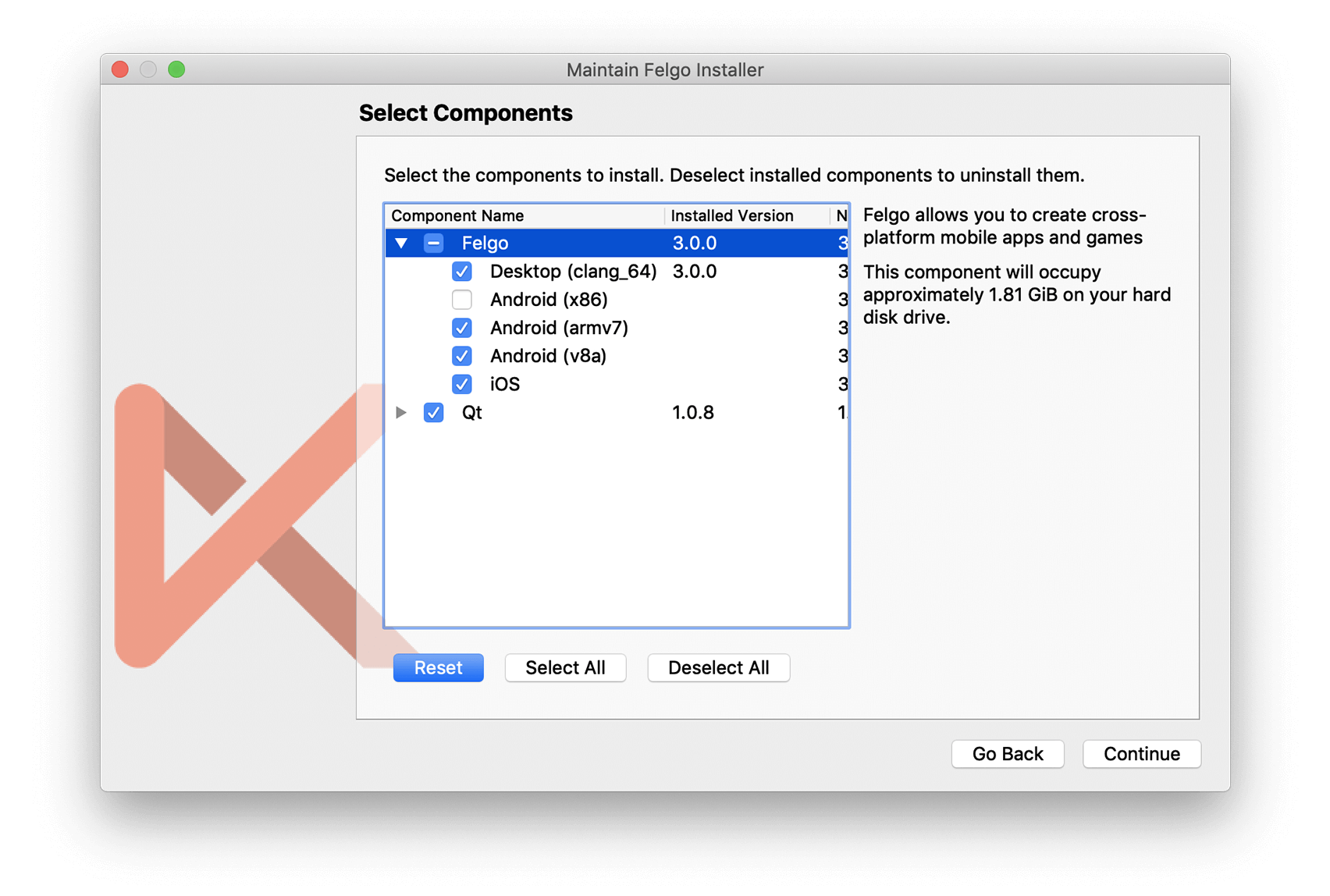 To build the Android 64-bit architecture you need to install the new ARMv8 package, then it will be available as a kit in Qt Creator.

We will summarize the important steps for building and including the new 64-bit architecture for app store submissions here.

The first one is called “Android App Bundle” and is not yet supported by Qt. However Qt already announced working on support for this format. This allows to combine all architectures into a single archive, upload it to Google Play and Google will serve the correct architecture for each user.

Until then, we use the second option, which is uploading individual APKs for different architectures. This is very straightforward, and there is only one very important detail that needs to be considered. Every APK must have a different version code set. This also means that you need to generate a separate Felgo license key, which is bound to the version code, for every architecture.

We prepared a little code example for your *.pro file, to use different version codes and license keys depending on the architecture:

You can update your existing *.pro file with this code, to make it easier to manage the different architectures. Note that Cloud Builds will require a different format, described later.

After building your app for each architecture, you will end up with 2 APKs, that you can upload with your next submission to Google Play.

If you are not a fan of fiddling around with native frameworks or want to automate your building and publishing process, Felgo Cloud Builds got you covered.

While you can use the Felgo Live Code Reloading for development on your mobile phone without any native frameworks installed, Felgo Cloud Builds closes the gap to your testing and distribution channels.

The Android 64-bit architecture is enabled by default when you configured the Android platform in Cloud Builds. You now also have the option of automatically increasing the version code for each build, and automatically generate license keys for those builds.

This is especially useful for the new Android 64-bit architecture, which requires 2 distinct APKs, with different version codes (and therefore different license keys). 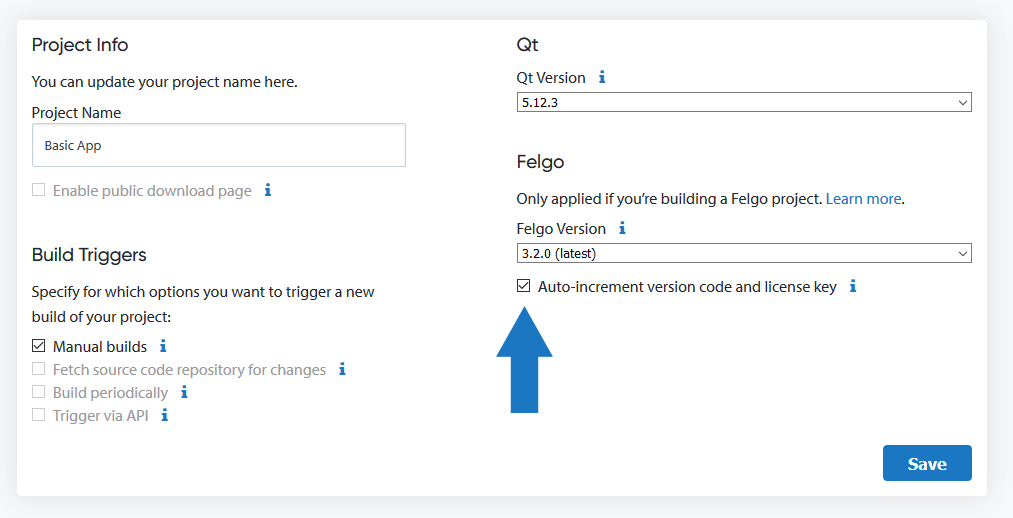 If you trigger a new build, you will now have the option to update the license key. If you already have triggered a build using this feature, you will see a suggested new version code in the dialog. For Android 64-bit, the version code is also automatically increased by 1. 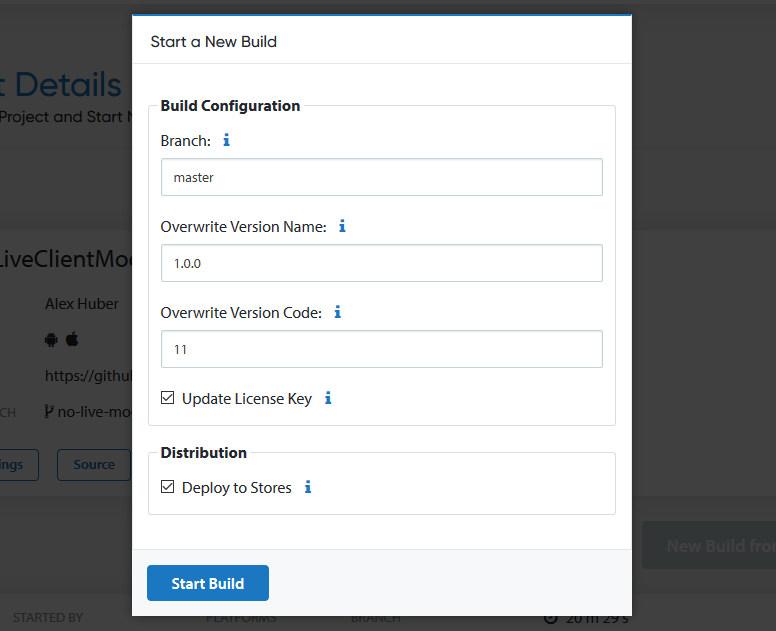 After building you can download those APKs and use them for your manual submission, or also automate this with connecting your Google Play account.

To enable app store uploads on Android, all you need is to provide the Google Play API JSON file of your Play Store account.

You can find general step-by-step instructions on how to use Felgo Cloud Builds here: Continuous Integration and Delivery (CI/CD) for Qt and Felgo

If you want to make use of the new convenient feature of automatic version code increase and automatic generation of license keys, you might need to apply some changes to existing apps.

If you are unsure about any of the listed changes, you can just create a new empty project from the Qt Creator project wizard (using Felgo 3.2.0 or later), and compare the following files with your own:

The *.pro file needs to contain properties for the identifier, version name, version code and license key. If you use Felgo plugins, also make sure to move the “FELGO_PLUGINS” definitions to the root level, and not inside the “ios” block of your *.pro file. This should then look like this:

The main.cpp file needs a minor addition. Add this code right after the felgo.initialize(&engine) statement:

The build.grade file needs to include the following block, as child of the “android” item:

The Project-Info.plist file needs to use placeholders, to apply the values defined in the *.pro file. Search for the following keys and add the placeholders:

There are a number of benefits in using a CI/CD for developing your projects. First of all, the obvious one, time savings:

Apart from that, there are several other advantages that you can benefit from:

Specifically for the build and deploy process of the new Android 64-bit architecture, you also gain the following benefits:

Continuous Integration and Delivery (CI/CD) for Qt and Felgo